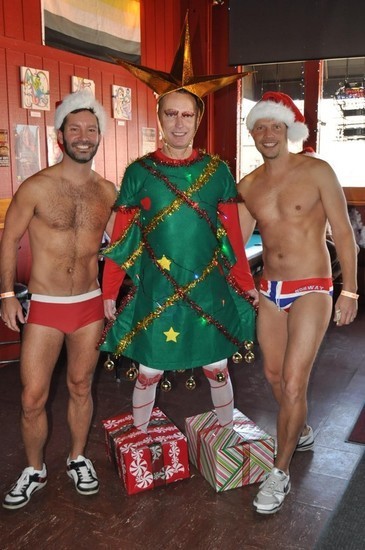 Chicago, IL - Saturday's mild temperatures are sure to bring out hoards of swimsuit-clad runners jogging a mile through the streets of Chicago's Boystown neighborhood for the second annual Most Fabulous Santa Speedo Run.

The Santa Speedo Run started in Boston in 2000 and thereafter migrated west to the Windy City, where the mainstream event raises money for the Chicago Diabetes Project.

Last year, Karl Sponholtz and his partner Jeff Colgan adopted the idea in an effort to create an event that would directly benefit the LGBT community here in Chicago. The decision was instinctual, as Sponholtz told ChicagoPride.com, "gay men and speedos go together like Lady Gaga and an outrageous wig!"

"Last year was planned only two weeks prior to the run and we hoped to raise a few hundred dollars with some friends," Sponholtz continued. "Instead, over 150 people arrived to raise nearly $3,000 on one of the coldest days of the year - that's a success!"

This year's sign-ups are already exceeding last year's numbers, so the duo decided to move the event from Andersonville, where sponsor bar Sofo Tap was filled to capacity last year, down to Sidetrack in Boystown.

There is a $25 fundraising minimum to participate in the event, which consists of running one mile, clad in nothing but a santa hat, running shoes and a speedo, or some other holiday-themed costume.

Sign-ups start at noon at Sidetrack, 3349 Halsted St., with the run itself scheduled to take place at 2:00 p.m.

There will be a prize for the top fundraiser as well as a Christmas raffle. DS Tequila has generously offered half-price food for all participants on the day of the run and a myriad of other local businesses, like Taverna 750, Burke's Public House, Windy City Sweetsand Sagin, LLC, have donated to the raffle.

Those who aren't up for a scantily-clad run through the heart of Boystown are encouraged to become an official Santa Warmer, cheering runners on and waiting at the finish line with mittens and coats. The event promises plenty of fun, drinking and singing of Christmas carols, including "Jingle Balls," which Sponholtz calls their "tour de force."

"There's nothing better than being a part of something that will continue to grow over the years -- we remember when Market Days was only a few blocks long and attended by a few hundred people.," Sponholtz said. "We promise to keep adding to the fun every year and have even bigger plans for the future, but we need everyone's support now! This event will always directly give back to our community, and we are proud to host it."