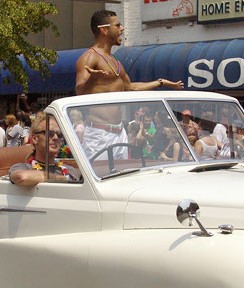 The parade, which is organized by Pride Chicago, had nearly 450,000 people in attendance according to the Mayor’s Office of Special Events. Spectators lined the streets, rooftops and balconies to celebrate Gay Pride in Lakeview.

This is the parade's 36th year in the city, and with 250 entries this year it has grown to become the second-largest parade, behind the annual Bud Billiken Parade, which is also the largest African-American parade in the country. Just 150 people participated in the first Pride parade in Chicago in 1970.

Gay pride parades began in the 1970s to commemorate June 1969's Stonewall riots in New York. The riots, which started after police raided a gay bar in Greenwich Village, are considered to be the beginning of the gay rights movement.

Recording artist and former American Idol Finalist, Jim Verraros greeted the crowd from the ChicagoPride.com float (full story) that broadcast his Billboard hit “You Turn It On,” from his new CD "Rollercoaster."

Pride was held in dozens of communities over the weekend, including San Francisco, New York City, Houston, Atlanta and Toronto.

All Around Entry- Q Television/Gay Games- for their energy and enthusiasm (as they look forward to the Gay Games).

Organization- Chicago Spirit Brigade- for their energy and performance as they went up the parade route showing their talents.

Business- Hydrate- who included Chicago House as part of their energetic float entry.

Illinois Lottery- for one of the most colorful, rainbow hued floats in recent years.

Tails in the City- for their elegant, well dressed entry participants.