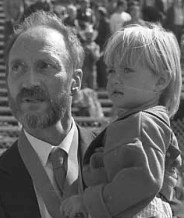 The film has its world premiere on June 4th during NewFest, New York City's annual LGBT film festival. The screening is at 5:30 p.m. that day at Loews 34th Street at 8th Avenue.

"This project has been a labor of love for David for several years and the Federation of Gay Games has been happy to help," said Kathleen Webster, Federation co-president. "The clips from the early years, especially the profile of Gay Games founder, Tom Waddell, are inspirational and fascinating."

Secter's film tells the story of how the Gay Games changed the way the world thinks about the LGBT community and sports. Compiling the hundreds of photographs, video and film clips involved dogged research into public and personal archival material, including the Federation of Gay Games' archives at the San Francisco Public Library.

Secter shot much exclusive footage at the first Gay Games held in the southern hemisphere, Gay Games VI in Sydney, Australia, held in November 2002. Other material documents social conditions throughout the Gay Games' history, including the concurrent AIDS epidemic that took the lives of many people connected with LGBT sports, notably Tom Waddell.

A prominent and poignant segment features comments from Sara Waddell Lewinstein and the daughter born of Sara and Tom Waddell, Jessica Waddell Lewinstein. Sara served on the original Gay Games organizing committee, San Francisco Arts & Athletics, which became the Federation of Gay Games in 1989. Now an Honorary Life Member of the Federation, Sara provided David Secter with much of the material seen about Gay Games I and II.

"Although I am not much of a jock, I consider the growth of the LGBT sports movement one of the healthiest trends in our community," said Secter. "When I read 'Gay Olympian' [Tom Waddell's biography by Dick Schaap], I found Tom's unique story incredibly moving and demanding of a wide mainstream and gay audience.

As I met Sara, their daughter, Jessica, and so many others who knew Tom, as well as countless others that he motivated, I wanted to share the Gay Games story, both as a documentary and hopefully soon as a narrative film. It was great to discover that professional video, still photos and other documents had been produced and preserved from all the Games, and that so many athletes, artists, authors, activists and anonymous others were happy to share their experiences."

The world premiere at NewFest will launch a series of appearances at LGBT film festivals during the next year prior to Gay Games VII in Chicago, taking place from July 15-22, 2006.

For more information about "Take the Flame! Gay Games: Grace, Grit and Glory," visit the Chicago Gay Games VII website at www.chicago2006.org and click on the "Take the Flame" Read More link on the home page. NewFest ticketing information is available at www.newfest.org.