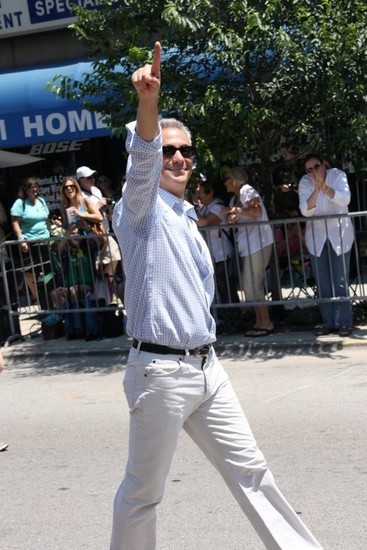 photo credit // kevin wayne
Chicago, IL - It started like it always did. A handful of cops stormed into a small, packed bar full of LGBT people and began lining them up. They separated the drag queens so female officers could feel them up to determine if they were men dressed as women. The police wagons pulled up and the cops started loading the bar patrons into them.

But this night, June 28, 1969, the patrons didn't follow the script. Instead, as a crowd began to gather outside the Stonewall Inn in New York's Greenwich Village, the drag queens and others who were supposed to meekly submit to the usual police harassment fought back. The next day thousands flocked to the street outside the bar to signal that, once and for all, LGBT people would keep fighting, proud and loud, for freedom from harassment and discrimination.

The Stonewall Riots changed New York but they had an impact far beyond the banks of the Hudson. A year after the riots LGBT activists in Chicago and Los Angeles went on the march to mark the anniversary of the New York uprising and to assert that LGBTs everywhere would no longer accept second-class treatment.

Thus, a tradition was born, one that's been celebrated in Chicago on the last weekend of June ever since. In those 43 years, the celebration has changed. Those first Pride parades in Chicago weren't parades as much as defiant political statements. And those who march, watch and celebrate have swelled from hundreds to hundreds of thousands. But, at its core, Pride is still a political, cultural and social statement that LGBT people are equal in every way and expect to be treated that way.

There is a lot more to celebrate now, thanks to the pioneering activism of those first marchers and others who've toiled to overturn every vestige of discrimination. This year will be the first under a U.S. president who supports our right to marry, a president who hails from Chicago at that. And members of the U.S. Armed Forces can march openly with pride this year without fear of being discharged.

And far from shunning us as they did 43 years ago, political leaders flock to Lakeview to celebrate LGBT Pride. Mayor Rahm Emanuel will be there in the Pride Parade June 24, as will Gov. Pat Quinn and a virtual who's who of members of Congress, state and local government. In fact, Emanuel has followed the tradition of his predecessor and proclaimed the entire month of June as Pride Month in Chicago.

"I, Rahm Emanuel, Mayor of the City of Chicago," reads the proclamation, "do proclaim June 2012 to be Pride Month in Chicago and urge all Chicagoans to recognize the many contributions the Lesbian, Gay, Bisexual and Transgender communities have made to our city."

Of course, the celebrations and commemorations aren't just limited to June 24. All month long, there are Pride-related concerts, readings, films, plays and much, much more all around the Chicago area. You can literally mark Pride every day of of the month at one event or another. To see all the listings go to chicagopridecalendar.org or pick up one of the 48-page Pride Guides available at many venues in Chicago.

So get out this month and take in some of the events and festivities before the day of the Pride Parade. After all, even after 43 years, as one of the defiant transgenders who stood up to police in the Stonewall Inn that first night, the late Sylvia Rivera, said, "I'm not missing a minute of this. It's the revolution."

Related: Check CalendarQ on ChicagoPride.com or in the Windy City Times for a complete list of all LGBT events in Chicago this summer.