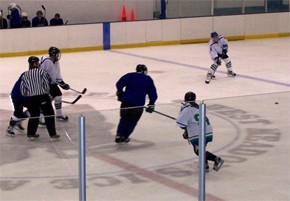 Chicago, IL - The Chicago Gay Hockey Association (CGHA) invades the Allstate Arena on April 16 for a game before the last regular-season Chicago Wolves game. The CGHA team, known as the Blackwolves, is the only predominantly-gay adult hockey team in the Chicago area.

They will face the Chicago Whalers, starting at 3 p.m. The CGHA plays its regular-season games in the Rolling Meadows senior men's league, with games at both Rolling Meadows rinks and the new ice rink in Hoffman Estates.

Chicago is one of several major cities with a gay hockey team. Los Angeles, Boston, Pittsburgh, Denver and Seattle also have gay hockey teams. New York City is the model, as the Big Apple now features five teams in a gay hockey league.

"Anyone can play hockey, regardless of your sexual orientation," said CGHA president and founder Chuck Jacobson, 30, of Chicago, who plays left wing. "Hockey is an intimidating, macho sport, but that doesn't mean a gay team can't play - and win. "Sexual orientation does not matter on the ice."

The CGHA has a few females on its roster, all of whom are lesbians. There also is a transvestite. The vast majority of players in the Rolling Meadows league are straight males, most ranging in age from 20 to 60. The CGHA team has players ranging in age from 18 to 53. The team includes, by day, a Federal Express delivery truck driver, a real estate agent, a waiter, the president of a million-dollar packaging manufacturer, a lawyer and a neurologist, among other professionals.

The CGHA's next game is April 3, against the Slashing Pumpkins. Gametime is 8:30 p.m., at the West Meadows Ice Rink in Rolling Meadows.

For more information on the CGHA, or to order tickets to the CGHA game at the Allstate Arena, which includes admission to the Wolves game that evening, call: (773) 968-7474.