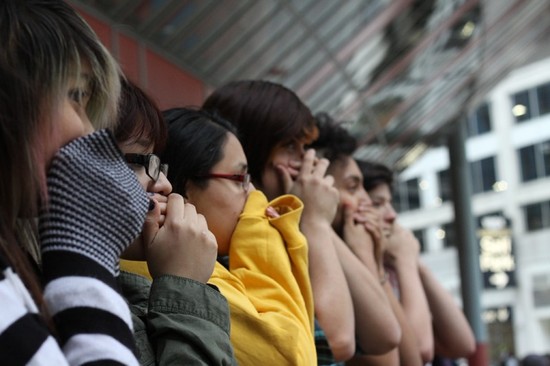 night of noise at the thompson center

photo credit // alex sennello
Chicago, IL - After remaining silent for the entire school day as part of the Day of Silence, an event created by the Gay Lesbian Straight Education Network (GLSEN) sixteen years ago to draw attention to the silence felt by marginalized, harassed, and isolated queer students, Chicago area youth gathered at the Thompson Center to break the silence together.

Night of Noise, the younger and louder sister of Day of Silence, has become popular with students in both in high school and middle school who celebrate the occasion with dances and parties.

The schedule featured performances by the Lyons Township Steppers, Abe Akande, and plenty of dancing.

As with previous Night of Noise events planned by ISSA's youth committee, the event featured a queer themed political "ask", to try and bring attention to the organization's efforts. This year's ask was that the city implements guidelines to effectively and respectfully handle its transgender and non-conforming youth who have been confronted with discrimination and harassment at significantly higher level than their cisgendered queer peers whilst being ignored by policy and efforts to help decrease harassment and discrimination within schools.

Additionally, the speeches given by the committee members and materials distributed by ISSA urged participants to become effective allies to their trans and gender non-conforming peers by educating themselves, talking about trans* issues in their queer student groups, advocating for policy inclusive of trans* students, changing the names of their student groups to be inclusive of gender minorities, and banding together to get gender-neutral bathrooms at their schools.

Perhaps most importantly, the time gave Chicago area students a place to share the successes of their organizing efforts and talk about their powerful Day of Silence experiences.

Like many others, Keith Johnson, 15, a QSA officers at Oak Park River Forest, shared the feeling that the Night of Noise represented the end of a very successful day, saying that they had "600 of 3200 kids sign up and a little more than that participate [by going silent], we even had some teachers participate, which was really cool."