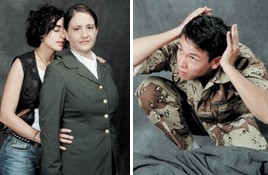 Original Story by Tracy Baim, Exploring the Experience of Lesbians and Gays in the Military

Chicago, IL - Half Life, a new play exploring the experience of lesbians and gays serving in the 1991 Gulf War, is being presented by Half Life Productions and Awaken! Performances Theatre Company Aug. 26 – Sept. 18 at American Theater Company’s venue at 1909 W. Byron. There will be a preview performance on Thursday, Aug. 26; the press performance will be on Friday, Aug. 27.

Based on an original story by Tracy Baim taken from numerous articles she has done in her 20 years reporting on gay issues, including the military’s anti-gay policies, Half Life is adapted for the stage by Bev Spangler, Artistic Director of Awaken! Performances, from a screenplay by Catherine Crouch. (The film script is a finalist in the Sundance Film Festival’s screenwriting lab later this year.)

Set in 1991, Half Life tells the story of Jen Hunter, a career military woman stationed just north of Chicago, who meets Kate Easten, a lesbian reporter. Both are working on the case of servicemember Roberta Mobley, who, after returning home from the Gulf War with severe burns from chemical exposure, is facing a dishonorable discharge from the military. While Hunter seeks truth from the inside, Easten works for justice in the court of public opinion, forcing both to face formidable career and life choices.

“I feel that this play is particularly topical, given that even as the current military conflict rages on, gay and lesbian service members continue to be discharged from active duty,” said Baim. “During the first Gulf War, prior to the establishment of the ‘Don’t Ask/Don’t Tell’ policy, the discharge orders for many gays and lesbians were put ‘on hold’ while those troops were willing to risk their lives during the war. Many were subsequently dishonorably discharged upon their return to home.”

“This is a work of fiction, based on facts,” added Spangler. “It is more timely than ever, as more than 10,000 servicemembers have been discharged for homosexuality in the past decade, and more continue to be kicked out each day.”

Half Life will be directed by Jenna Newman, who directed Awaken!’s acclaimed production of Parallel Lives: The Kathy & Mo Show.

Tracy Baim, publisher and managing editor of Windy City Times, has worked in the gay and lesbian press in Chicago for 20 years. She completed Half Life, a novel that is the basis for the play, five years ago, and then worked with filmmaker Catherine Crouch to adapt it into a screenplay, which recently received a successful staged reading in Los Angeles.

Bev Spangler is Artistic Director of Awaken! Performances Theatre Company (awakenperformances.org), a group dedicated to exposing intolerance through humor, wit, and pathos. She has written and performed solo works in Chicago, New York and Europe for more than a decade. Awaken’s most recent work was last winter’s acclaimed Parallel Lives: The Kathy & Mo Show.

A portion of every ticket sold will benefit the Servicemembers’ Legal Defense Network (SLDN), which will also host a benefit matinee at 3 p.m. on Sunday, Sept. 12. SLDN has estimated that approximately 125,000 lesbian and gay troops are currently serving in the armed forces, including the wars in Iraq and Afghanistan. Since 1993, more than 10,000 servicemembers have been discharged for homosexuality – 1,231 in the year 2000 alone – costing taxpayers more than $260 million, not including the costs of investigation or the training costs of many men and women who choose not to reenlist because of the gay ban. SLDN reports that women, particularly women of color, have always been disproportionately impacted by the ban. For example, in 2000, lesbians represented 15% of people serving, but accounted for 24% of the homosexual discharge cases.