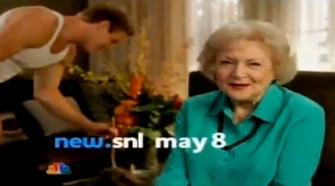 betty white hosts snl on may 8

photo credit // nbc.com
Gay men dig old ladies, especially one with a slightly dirty mind like Betty White. Tonight the Golden Girl will be hosting "Saturday Night Live" all thanks to a bunch of gay men and the Internet.

White's rabid fans - including thousands of gay men - hit the Internet in a massive Facebook push to get NBC to invite her to host "SNL." And the much-publicized campaign worked.

"At first, I thought people were putting me on," White said in an interview with McClatchy Newspapers. "I told my agent, ‘Please say thank you, but no thank you.' I'd rather watch it than do it. But he insisted, and I trust his judgment."

Tonight is the long-awaited episode hosted by the 88-year-old White. The show, billed as a Mother's Day special, will feature a number of "SNL" alums including Tina Fey, Amy Poehler, Ana Gasteyer and Molly Shannon.

White's career spans seven decades including her role on the "Mary Tyler Moore" show where she played Sue Ann Nivens, but it was her signature role on "The Golden Girls" that most gay men recall. White portrayed Rose Nylund for 8 years.