CNN under fire for ex-gay segment 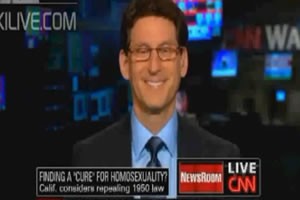 Chicago, IL - Gay activists and bloggers are outraged over a CNN segment about a California lawmaker's attempt to repeal a law that mandates research into altering the sexual orientation of gay men and lesbians.
CNN host Kyra Phillips begins the segment with: "Homosexuality, is it a problem in need of a cure?"

Producers pitted California Assemblywoman Bonnie Lowenthal, the sponsor of the repeal measure, against Richard Cohen, a leader of the ex-gay movement.

Supporters of an anti-gay bill that prescribes death for repeat offenders currently being debated in the Uganda Parliament have praised Cohen's book Coming Out Straight as the inspiration behind the bill.

The Gay & Lesbian Alliance Against Defamation (GLAAD) took offense to CNN's inclusion of Cohen as an authority on the subject.

CNN introduced Cohen as a "Psychotherapist, educator and expert in the field of sexual orientation."

Cohen himself admits that he's not a licensed therapist.

"No, I'm not," Cohen answered MSNBC's Rachel Maddow in December when she asked: "Are you a licensed therapist?"

"I have practiced psychotherapy under the requirements of every state that I've practiced in and resided in over the last 20 years," Cohen said. "And I have helped thousands of men and women come out of homosexuality."

"I am a professional psychotherapist, Rachel, and my credentials are that I came out of homosexuality – I've been married 27 and a half years to my beautiful wife, we have 3 great children," he added.

Bloggers also criticized producers for not including a representative of the gay and lesbian community.

"While the segment includes balance and Phillips handily challenges Cohen, the bigger problem is that the segment about whether homosexuality can be cured doesn't feature any actual homosexuals," wrote Michael Triplett at the National Lesbian & Gay Journalist Association's blog. "While Lowenthal is a worthy representative of the opposition and a wonderful spokeswoman as an ally, it's always problematic when these kinds of conversations go on without having the people most effected by the legislation – gays and lesbians – represented on the panel."

Truth Wins Out, a group dedicated to fighting the ex-gay movement, called the segment "absurd."

"The fact that you asked this question is beyond the pale, because it's been answered, repeatedly, by every credible mental health and medical organization, going all the way back to the early 1970's!," the group said on its blog. "No, Kyra, it's not a 'problem in need of a cure,' and it's absurd that you would ask the question."

GLAAD says that an invitation to appear Wednesday morning on CNN to discuss the matter was revoked at the last minute without an explanation.