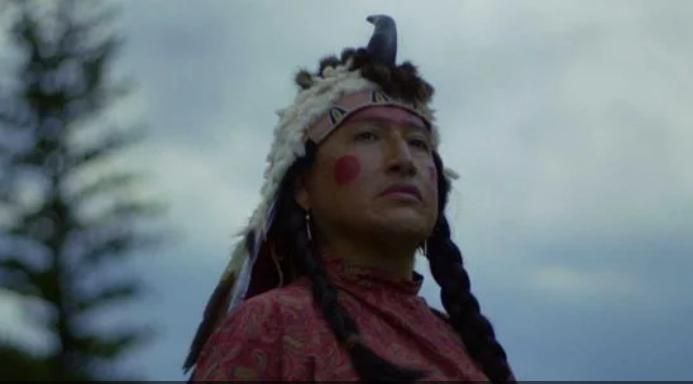 Writer-director Travis Fine follows up his critically lauded film ANY DAY NOW with this epically scaled, visually stunning masterpiece of queer cinema. TWO EYES is a cinematic triptych that follows three main characters in three distinct time periods. In late 19th Century Montana, Dihlon (Benjamin Rigby), a British lawyer turned painter, seeking inspiration for his art, explores the breathtaking landscape with his Native American guide, Jacy (Kiowa Gordon). He finds his conceptions of himself and the world around him challenged when Jacy introduces him to Indigenous people, including the two-spirit Poopahte (Samuel Jaxin Enemy-Hunter). The attraction between Jacy and Dihlon, palpable from the outset, eventually leads to a passionate, romantic affair. In 1979 Barstow, California, Gabryal’s (Uly Schlesinger) mundane life is given a shot of adrenaline by the arrival of a new exchange student, Alasen (Jessica Allain), who envelopes them both with her lust for life. In present-day Wyoming, Jalin (Ryan Cassata), a gifted teenage musician who is trans, works through his self-destructive feelings with his perceptive, non-binary therapist Andrea (Kate Bornstein). Exploring themes of gender, love, grief, and the power of art to transcend time, the seemingly unrelated narratives are ultimately interwoven into a single, powerful storyline that reveals the deep, eternal connection between all three characters. The title takes its meaning from the way many Indigenous tribes understood, respected, and honored those in their tribe who saw with two eyes: one that looks out as a man and one that looks out as a woman.

Accessibility: This film has closed captions and live audio description. Additionally, ASL and CART will be provided for a post-screening discussion; subject to filmmaker attendance.