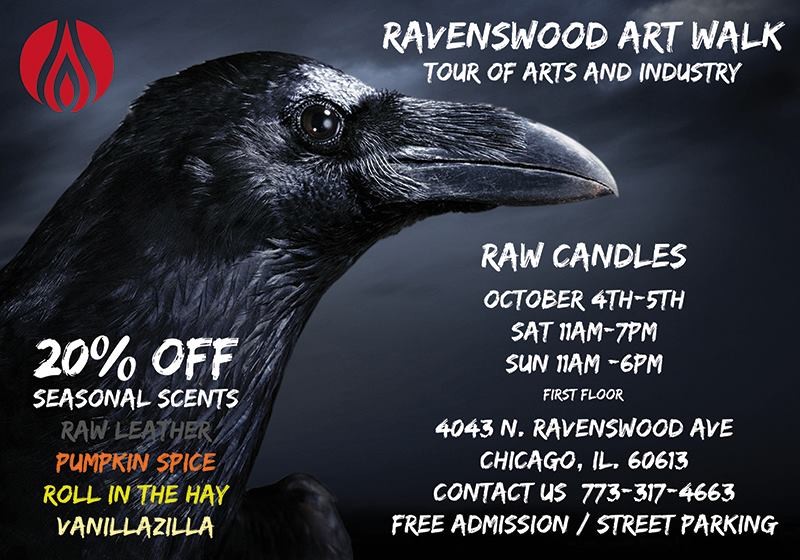 Ravenswood Art Walk Kicks Off Chicago Artists Month with its 13th Annual "Tour of Arts & Industry" We're all the way at the end of the hallway once you get inside the building. Look for the signs. Saturday Oct 4th, 2013, 11am - 7pm Sunday Oct 5th, 2013, 11am - 6pm This event gives you an inside look at how Chicago artists and business create designer products art. The owner Kevin Lemel, will be on site to explain the science behind Raw Candle production. Raw Candles will be featuring our jar candle line for the upcoming fall and winter seasons. We're offing 20% OFF on Raw Leather, Pumpkin Spice, Roll In The Hay, and Vanillazilla. This is a great time to load up for Halloween and the upcoming holiday season. About the Ravenswood Art Walk It is our mission to generate community investment in the artistic, industrial and historic importance of Ravenswood and to raise awareness for the unique hub of creative practices that exists here. Over the years it has grown into what it is today; an exciting neighborhood event featuring over 150 artists and highlighting the wonderful talents and diversity of the Ravenswood Corridor. In 2003, Ms. Roth encountered two natural partners, Dave Avery, an artist, and Sarah Shumate, Program Director of The Jane Addams Resource Corporation (JARC). JARC had been running a "Tour of Industry" since 1998 that focused on the area's industrial history in the Ravenswood Corridor. The three expressed a mutual desire to include the increasing population of artists working in the area. The Ravenswood Bank joined the CWCA as a sponsor of "The Ravenswood Corridor Arts & Industry Walk" in 2004. William Marquardsen, an employee of the bank, joined Judith Roth in her continued efforts to nurture the Ravenswood ArtWalk. Marquardsen organized volunteers to staple and hand-deliver maps to the 25 locations participating in the tour that year. RAWlogo_WEB_large2006 marked several milestones for ArtWalk. Dale Davison, inspired by her art teacher Vincent Hawkins, Founder of the Fire Arts Center, brought new energy to forge a fresh grassroots coalition among key community members. In August of that year, Judith and Dale re-named the organization ArtWalkRavenswood, and it became an official 501(c)(3) nonprofit corporation. In addition to the new name, ArtWalkRavenswood hired Theodore Atzeff, a local artist, to create their re-visioned logo. 2006 was also the first year that ArtWalkRavenswood awarded the Ravenswood Arts Advocate Award. Conceived of by board members Dave Avery and Mary Pat Studdert, the awards honor the people and organizations that have promoted the continuation of art and industry in the historic Ravenswood Corridor. After several successful arts tours, the 2013 Executive Board elected to merge with existing organization Ravenswood Community Council (RCC) to improve their capacity to serve the artists of Ravenswood. RAW now operates under the parent RCC 501(c)3 nonprofit organization. Thanks to the sustained growth and outpouring of community members, Ravenswood ArtWalk is going strong and has grown to include visiting artists and artisans from all around Chicago in celebration of Chicago Artists Month. Join us this October 4-5 for the 13th Annual Tour of Arts & Industry!