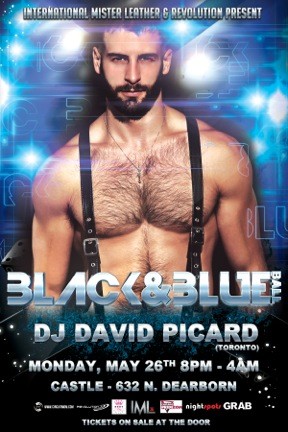 IML 36 and Circuit MOM Productions Present: "The Black & Blue Ball" Memorial Day at The Castle (formerly Excalibur). This is the legendary official closing party everyone waits for all winter and this year, it will be bigger, hotter and dirtier than ever. Making his IML debut is the incomparable Producer/ DJ David Picard from Toronto. His deep, driving house and tribal beats, coupled with the eye-popping LED/Laser and light show and the world class sound system will keep you dancing all night long. About DJ David Picard: Hailing from Toronto, David Picard's layered, carnal sound is becoming a staple on North American dancefloors and beyond. After debuting at Pitbull he quickly joined the ranks of talent spinning for Prism - creators of North America's largest summer circuit event - taking his music to such famous Toronto venues as Fly, Guvernment, Surface, The Hoxton, Wrong Bar and Black Eagle and spinning at TIFF and for Toronto's ruling fashion duo Greta Constantine. His addictive energy has made men sweat at both the legendary Black Party and genre-defying EPSP in NYC, at Montreal's Apollon for BlacKKnight, in Mexico City with ManInFest and at Chicago's own Hydrate for Brawl: Manhole. Drawing on a love for gutteral after-hours music, David's sets fuse tribal, progressive, vocal and tech into an alchemy of sound known for keeping crowds at a peak until the lights come up.