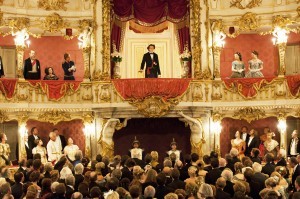 The story of the gay "Mad King Ludwig," the 19th century Bavarian monarch known mostly for his lavish fairytale castles and his solitary nature, has been elevated to almost mythical status. In this lushly art-directed biopic, co-directors Peter Sehr and Marie Noëlle give the life of King Ludwig II an epic treatment while also managing to understand the emotions that drove him. At a young age, Ludwig (Sabin Tambrea) develops a deep appreciation for art and music, believing that it has mystical powers to change the course of humanity. The embodiment of his ideals is the music of Richard Wagner, for whom he becomes a devoted patron. Pressured to produce an heir, he is briefly engaged to his cousin Sophie (Paula Beer), though it is clear their relationship is strictly platonic. Suspicious of the palace courtiers, Ludwig surrounds himself with commoners who swear loyalty to him. He seeks friendship where love should blossom and love where passion is forbidden – especially with the handsome horse master who figures in Ludwig’s erotic dreams. But war is on the horizon, as Prussia sets its sights on establishing a German Empire. When the war is lost and Bavaria’s independence with it, Ludwig retreats into his dream world, ransacking the royal coffers to build the palaces of his visions. The sun begins to set on Ludwig’s life, but the legend of this gay historical figure has already begun to take root. Phenomenal newcomer Sabin Tambrea plays the young Ludwig II with an incomparable breadth of emotions in this epic narrative of breathtaking grandeur that was shot on the actual locations, including the lavish fairytale castles that remain a hallmark of Ludwig II’s all too brief reign.